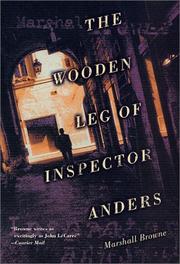 THE WOODEN LEG OF INSPECTOR ANDERS

Fans of Michael Dibdin’s Aurelio Zen mysteries will welcome this first mystery from Australian author Browne, whose hero, Inspector Anders of the Rome Police, is equally thoughtful and courageous in his own unorthodox way. His nominal assignment when he’s sent south is to investigate the bombing that took the life of Magistrate Fabri, who was overseeing the study of Judge De Angelis’s assassination. Anders, who lost a leg in a terrorist attack, introduces himself to the local law enforcers, but declines their help and won’t leave his phone number or address with them. Soon he is being followed on foot and by car by persons unknown, although one is surely Detective Matucci, his police liaison, and several others are presumably in the employ of the Mafia. Induced to make serious rather than cursory inquiries by the judge’s passionate widow, Anders, like the judge before him, connects the Summit Insurance crash with Provincial bank president Chiro Rastos, a mafia VIP. Then, again following the judge, he becomes a target as government officials, society icons, and the omnipresent Mafiosi line up against him. Allowing himself to be captured, Anders brings the house down, literally, with an ingenious use of his wooden leg.

Solid stuff, and though one might wish for more of Dibdin’s facility with language, there’s plenty here to admire from the iconoclastic Anders to the Machiavellian twists of Italian politics.