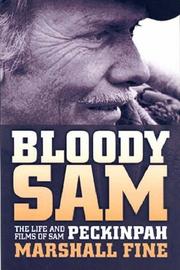 BLOODY SAM: The Life and Films of Sam Peckinpah

Gripping account of the two-fisted, drunken life of filmmaker Peckinpah (1926-84) that will keep even a repelled reader drawn in. Fine, a syndicated entertainment columnist, writes with a clear eye unblinded by myth about his hypnotic, larger-than-life subject. Born in Fresno, Peckinpah was the small, wiry, feisty son of a tall, Lincolnesque, dramatically well-spoken lawyer who was also a disciplinarian who thought it wise at times to backhand the boy across the room--which would send Sam into his mother's apron for comfort. Peckinpah went to military school, joined the Marines in WW II, never fired a shot in anger. Surprised readers will discover that his earliest theatrical work was as a stage director for the small-potatoes Huntington Park Civic Theater, mounting South Pacific, Our Town, The Man Who Came to Dinner, and loving productions of Saroyan and Tennessee Williams. Years writing and directing TV oaters (his mother's family were ranch folk) led to his first movie, The Deadly Companions (1961), a flop, then to his first classic, Ride the High Country, distinguished by its first-rate dialogue, authenticity, brilliant editing, and flawless turns by Randolph Scott and Joel McCrae as aging gunfighters. The climactic blood ballet of The Wild Bunch stamped him forever as ""Bloody Sam,"" a name he hated because it ignored everything sensitive and large-minded in his work. By Straw Dogs, he was already his image: a sucker-punching, wife-beating, smash-up drunk, addicted to rage and appreciative of rape and woman-stomping. Fine, however, shows Peckinpah's obverse, in the director's finely crafted, egocentric memos, and in his beleaguered fellow workers' love for him. Again and again, readers will want to backhand Sam across the room but instead will find themselves spellbound by a bullheaded alcoholic in eternal crisis. Like walking barefoot through a nest of snakes and scorpions.