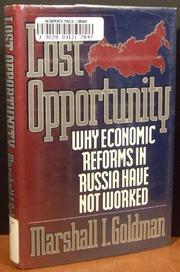 Why Economic Reforms in Russia Have Not Worked

by Marshall I. Goldman

An accessible audit of Russia's efforts to gain a place at global capitalism's table after more than seven decades of Communist misrule and mismanagement. As Goldman (Economics/Wellesley; What Went Wrong with Perestroika, 1991, etc.) makes abundantly clear, switching from a centrally planned economy to a market economy is easier said than done. Goldman draws on in-country contacts, official records, and contemporary news reports to document how Moscow has gone wrong at critical junctures since 1985, when Mikhail Gorbachev first set the Soviet Union on a restructuring course whose implications he did not fully grasp. After a lucid account of the sociopolitical events that allowed Boris Yeltsin to oust Gorbachev (in effect, by undermining the USSR), the author offers an unsparing critique of the current incumbent's stewardship. Like his unfortunate predecessor, Goldman points out, Yeltsin failed to facilitate the formation of new businesses. Nor did he and his chief adviser (Yegor Gaidar) do enough to encourage land ownership. They also neglected to institute currency reforms that could have dampened inflationary pressures and enhanced the ruble's convertibility. Banking, price control, and tax policies were botched as well; the regime has dithered disastrously on privatizing state-owned enterprises; and the government has yet to sponsor commercial codes that might restore much-needed order to a chaotic, crime-ridden consumer marketplace. The author goes on to weigh Russia's makeover prospects in the context of the bootstrap recoveries achieved by former Kremlin satellites (Hungary, Poland), mainland China, and WW II's losers (Japan, West Germany). Even without much foreign aid or investment in the short run, concludes Goldman, the Russians could eventually win their latest revolution, albeit at no small cost. An informed and informative analysis of the toil and trouble attendant upon a great nation's attempts to gain world-class status as an economic rather than military power. Helpful tabular material and graphs throughout.