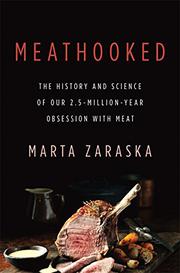 The History and Science of Our 2.5-Million-Year Obsession with Meat

With an open mind, a vegetarian journalist examines our “love affair with meat.”

Zaraska cites evidence that vegetarians live longer and familiar statistics showing a correlation between meat consumption and cancer, diabetes, and heart disease. She also shares findings that raising domestic animals contributes greatly to global warming. “Producing one calorie from animal protein releases eleven times more carbon dioxide than producing one calorie from plants,” she writes. “Meat is responsible for up to 22 percent of all greenhouse gases—by comparison aviation contributes a mere 2 percent.” Nonetheless, Zaraska admits to the appeal of meat, which she herself eats on occasion. Moreover, she recognizes that meat eating played an important role in the development of our species, encouraging the invention of sophisticated tools and social organization that allowed early humans to seize the prey of other carnivores as well as killing them ourselves. It also encouraged a migratory lifestyle, and eating meat gave us the extra energy to grow our brains. On the other hand, the author convincingly debunks outsized claims for the value of a high-protein diet. Zaraska examines our attraction to meat, which she explains is richly endowed with umami (the Japanese word for delicious). It is a taste shared with tomatoes and the seasoning monosodium glutamate, as well as meat, and it is now considered a basic taste along with salty, sweet, sour, and bitter (for all of which we have taste receptors). Despite the appeal of taste, the author also finds social and economic factors—e.g. government subsidies to grain producers that lower the cost of animal feed—and the prestige of Western lifestyles in countries such as China. Ultimately, she predicts a global shift to a preponderantly vegetarian diet.

A well-researched, refreshingly optimistic look at a serious issue, free of ideological preconceptions.