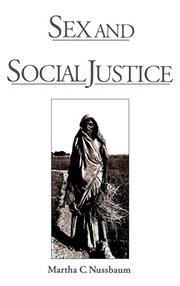 University of Chicago law and ethics professor Nussbaum combines feminist theory and an internationalist perspective to fashion a stunning defense of justice. In a series of works (Poetic Justice, 1996; The Therapy of Desire, 1994; etc.), Nussbaum has tried to demonstrate the value of philosophy to the practical matters of everyday life; she continues that work here. She begins with the assertion that justice consists of respecting the equal worth of all human beings, given the universal human capacities of choice and reasoning. An essential element of this respect is protecting the liberty of individuals to create lives of their own choosing. As women in general, as well as lesbian and gay men, have too often been denied such freedom, justice should be and is a central concern for feminism. Yet Western feminism itself has too often neglected the needs and conditions of women of the non-Western world. A feminist theory of justice must concern itself both with abstract liberties, such as freedom of expression, and the practical needs of nutrition, health, education, shelter, and physical safety. Against charges that her vision of justice is a foreign idea being imposed upon other cultures, she argues that she is defending the creation of space in which free choice for all, including women, actually exists. In another vein, against those who would impose a rigid cultural relativism, she argues that local tradition is not always an inviolable code that must remain unchallenged. Such traditions may simply reflect the most powerful voices—invariably male. We must be suspicious of norms formed under conditions of injustice. All these themes are developed in a series of carefully crafted essays. There are weaknesses here. Questions of sexuality are not particularly well integrated within her arguments, and as she admits, she does not deal with the question of global redistribution of wealth as an essential element of justice. Nevertheless, a brilliant book.