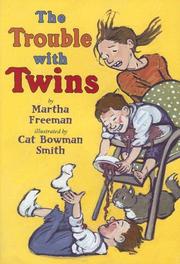 THE TROUBLE WITH TWINS

Twelve-year-old Holly returns for her third troublesome turn, this time with nearly two-year-old twin brothers. A week before Dylan and Jeremy’s birthday, Holly’s mother and stepfather are busy to the point of testiness. Holly volunteers to plan the boys’ party. She calls her friends from Trouble with Babies (2002), Xavier and Annie. The trio decides on a science-themed party, which isn’t a hit with toddlers . . . at least not the planned aspects. The local barista—who sports a Mohawk, bright clothes and bad jokes—looks like a clown. The cake is nibbled by cats, but Twinkies under whipped topping taste great. The party’s deemed a success, and Holly realizes that twins may be trouble, but they’re wonderful once you’re used to them. The lack of multicultural/alternative family details makes this entry in the series more generic, but its simplicity and realism and Holly’s timorously positive attitude are still charming. Smith’s pen-and-ink illustrations might not always sync up with the text, but they do bring Holly’s world to life. A solid early-chapter purchase for large collections. (Fiction. 7-11)