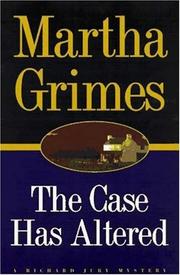 THE CASE HAS ALTERED

"The worst things happened to Jury's women," muses his friend Melrose Plant all too accurately. The victim this time is Supt. Richard Jury's former lover Lady Jennifer Kennington, suspected first of shooting actress Verna Dunn, then two weeks later strangling Dorcas Reese, homely kitchen girl at Fengate, the residence of Verna's ex-husband Max Owen. Jury's first idea- -prying Plant loose from his litigious aunt's nuisance suit against inoffensive secondhand-shopkeeper Ada Crisp to send him undercover to Lincolnshire as the antiques appraiser who'll help evaluate Max's treasures—yields lots of data about Max, his understanding wife Grace, his sculptor nephew Jack Price, and their neighbors Major Linus Parker and Peter Emery, his blind groundskeeper. But despite the data, there are precious few conclusions. And when Jury confronts Jenny directly, she simply admits an undeniable motive for killing Verna and expands on the lies she's already told the police. So it's on to the courtroom, where procedural fireworks await. As always with Grimes (Hotel Paradise, 1996, etc.), the pace is leisurely, at times maddeningly so; yet the endless repetitions of the case's central questions—what was Dorcas so sorry she'd listened to and done? why did she tell her trusted intimates she was pregnant when she wasn't? why were the two murders committed with different weapons?—actually deepen their mystery instead of dispelling it. Even the farcical subplot—that nuisance lawsuit back home- -adds its counterweight to the Fen Country gloom to produce Grimes's best book in years.