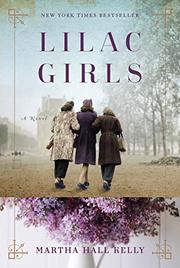 Kelly’s three narrators are based on actual people whose destinies converged in or around Ravensbrück, Hitler’s concentration camp for women.

It's 1939: Hitler has invaded Poland, and although few suspect it, France is next. Caroline, a former debutante who, at 37, appears to have missed her chance for marriage, does charity work at the French Consulate in Manhattan. Requests for visas accelerate, as does demand for the care packages Caroline sends overseas. When her married would-be lover, Paul, leaves New York for Paris shortly before the Germans march in, Caroline fears the worst. Kasia, a former Girl Guide, joins an underground youth group after the Nazis occupy her hometown of Lublin, Poland. Soon she's arrested, along with her mother and sister, Zuzanna, a medical student. The women are sent to Ravensbrück, a concentration camp whose mission is to work the prisoners to death—those, that is, who aren't terminated immediately upon arrival. (A crude form of lethal injection is used, as the Nazis are still experimenting with more efficient means of mass murder.) Kasia watches in horror as one of her former teachers is fatally mauled by a dog set on her by Binz, the head guard. Young physician Herta, the third narrator, is a loyal German and Nazi. Although not happy about Hitler’s edict that women doctors cannot be surgeons, she's less than upset when her father’s Jewish doctor is deported. She accepts a post at Ravensbrück, where her Hippocratic oath is immediately compromised: her first duty is to dispatch an elderly prisoner. Her eagerness to scrub in quickly overcomes any remaining scruples as Herta conducts grisly surgical “experiments” on inmates, including Kasia. The women, many permanently maimed, who undergo these “studies” become known as the “Rabbits.” Kelly vividly re-creates the world of Ravensbrück but is less successful integrating the wartime experience of Caroline, whose involvement with the surviving Rabbits comes very late.

In this mashup of two war novels, the more conventional New York story pales by comparison.