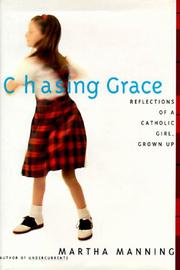 Reflections of a Catholic Girl, Grown Up

Manning, a clinical psychologist who wrote lyrically and humorously about her battle with depression in Undercurrents (1995), here offers by contrast the pedestrian memoir of a self- acclaimed casualty of Catholicism. Manning divides her book into short sections on such topics as ``Sin,'' ``Hell,'' and ``Absolution,'' breezing from one bland reflection to the next about Catholic girlhood. There's much stock scenery here: the tyrannical nuns and their heated warnings about the danger of boys looking up one's skirt; the brainwashing prolife lectures and scary films about childbirth; the lousy taste of the host at the First Communion. Sex was evil and impure: ``The fact that women who endured twelve to fourteen years of Catholic School are not all virgins or prostitutes is a miracle.'' The author skims the surface of the church's problems for (and with) women. Her text often seems more like the record of a pleasurable, meandering conversation among women exchanging anecdotes about their childhood than a measured, reflective study. Manning wants to be transgressive by speaking up as an enlightened woman, yet this is as G-rated as it comes. Her book lacks the irony, the wit, and certainly the richness of Mary McCarthy's memoir of Catholic girlhood, which was filled with twisted characters and real Gothic horrors, powerfully described. Manning's experiences sound mild by comparison. In fact, she seems so little held by her subject matter that she sometimes glides into curiously tangential vignettes: One night she follows a yuppie couple in the supermarket, seething resentfully as they select their gourmet items while she shuffles along with her fiscally challenged cart. Some of Manning's mild recollections might work at essay length; overall, the book lacks substance and freshness. ($50,000 ad/promo; author tour)