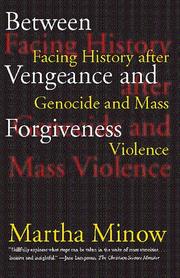 BETWEEN VENGEANCE AND FORGIVENESS

A leading legal scholar’s judicious examination of our varied reactions to mass violence and their relative potential for healing people and nations. From the Holocaust to apartheid South Africa and Rwanda, 20th-century collective violence has challenged societies to deal with the aftermath. And Minow (Law/Harvard; Not Only for Myself, 1997) makes her own significant contribution to this effort by sketching out a “lexicon of potential responses to collective violence.” Through a series of chapters highlighting specific forms of responses in their historical contexts, she formalizes a vocabulary for assessing the ways in which society is able or unable to deal with irreversible loss (and the emotional damage caused by large-scale violence). First she contemplates the possibility of bridging reactions of vengeance and forgiveness, raising one of her central arguments: the healing power of therapy for victims, bystanders, and even offenders. In further chapters, she discusses the history of war-crimes prosecution, focusing on the complex legacies of the Nuremberg and Tokyo trials following WWII, and reparations, drawing on the case of the US government and former Japanese-American internees. Minow’s chapter on truth commissions proves to be the most engaging, given its timeliness amid the ongoing debates about South Africa’s Truth and Reconciliation Commission. Citing the importance of direct personal narratives, she argues that when society prioritizes healing and the restoration of human dignity, a truth commission may serve better than a prosecution actually does. Her final chapter assesses the value of public monuments, educational programs, and amnesty. Some readers will feel frustrated by Minow’s admitted “resistance to tidiness” in drawing conclusions and by her rationalized tightrope walk between the extremes of idealism and cynicism. But this is a mostly enlightening exploration of a thorny subject. (For another look at these questions, see Wole Soyinka, The Burden of Memory, The Muse of Forgiveness, p. 1442.)