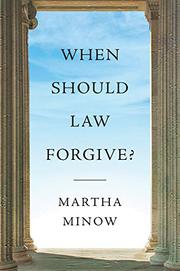 WHEN SHOULD LAW FORGIVE?

A Harvard Law School professor examines when it is appropriate for the law, that instrument of punishment, to show mercy through forgiving misdeeds.

The law in this country, writes Minow (In Brown's Wake: Legacies of America's Educational Landmark, 2010, etc.), is already inclined to forgive legal misbehavior in the matter of debt, allowing for bankruptcy proceedings in the place of erstwhile debtors’ prisons. That there is stigma attached and that those who go through the process may find their credit ruined for years does nothing to diminish the fact that those with legitimate claims against the debtor are forced into a system that may pay them pennies on the dollar. Thus, while’s there no reason to take joy in bankruptcy, at least it’s a possibility that all parties settle on. Things are different when it comes to murder, individual or mass, as with the genocidal killings in parts of Africa a generation ago, when Archbishop Desmond Tutu and other leaders organized campaigns that forgave while not forgetting. Minow examines when it is appropriate for legal institutions to press for forgiveness rather than punishment. For example, what of the case of child soldiers, kidnapped and pressed into service in terrible campaigns in conflicts throughout the world? “To ask how law may forgive is not to deny the fact of wrongdoing,” writes the author of this and other problems. “Rather, it is to widen the lens to enable glimpses of these larger patterns and to work for new choices that can be enabled by wiping the slate clean.” Throughout, Minow writes evenhandedly. She observes that in the instance of presidential pardons, one vehicle for forgiveness, it all hinges on lack of corruption—lack that could not be demonstrated in the instance of Donald Trump’s pardon of disgraced Arizona lawman Joe Arpaio, nor by Bill Clinton’s pardon of big-ticket donor Marc Rich. Forgiveness works, Minow holds, but only when it is clean, unforced, and willingly extended.

A solid, accessible contribution to the literature of restorative justice.