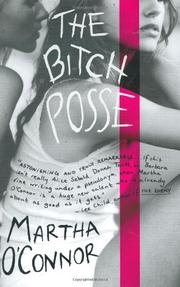 A manic first novel follows a desperate clutch of Illinois high-school girls whose friendship makes up for the depressing facts of their middle-class lives.

In alternating voices, O’Connor presents three young women whose ill-fated attempts to take some control over their troubled senior year continue to have profound repercussions 15 years later. At Holland High in 1988, Cherry uses the example of her coke-snorting single mother to get as wasted as possible and skip school; former homecoming queen Amy harbors deep resentment of her parents for favoring her retarded older sister, Callie, and keeping her institutionalized; and Rennie, an honor student, chooses her route to ruin by losing her virginity to her lecherous drama teacher. All of them find release in cutting themselves with knives. In their friendship with each other, called the Bitch Posse, they swear loyalty forever and promise “to put no friends or lovers before one another,” which, in the end, proves unsustainable. The treachery of men does intrude, in the form of Cherry’s abusive boyfriend and Rennie’s manipulative married lover, Mr. Schafer. To play as raunchy as the boys seems to be what the three are after (“You have to hurt if you want to feel anything at all”), but “Let’s go get wasted” is the sad refrain. Years later, Cherry is stuck in a mental institution, Amy suffers a miscarriage and a soured marriage in Upper Michigan, while Rennie, now a published novelist and California high-school teacher, finds herself addicted to seducing the young men in her charge. As a newcomer, O’Connor makes an aggressive stance here against so-called chick-lit—“and all forms of lying,” she notes. The result is more in-your-face, reality women’s fiction, but still formulaic in its way, with plenty of clitoral sex, women’s friendships that outweigh their relationships with men, bad choices and self-destructive behavior. The writing, in both cases, remains a shameful afterthought.

A novel tough talking, unlovely, and screaming for attention.