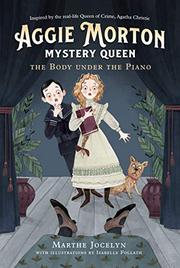 THE BODY UNDER THE PIANO

A fictional version of young Agatha Christie, a bloodthirsty writer, is in an excellent position to solve a gruesome mystery.

It’s 1902, and 12-year-old Aggie is a strange child in her largely white, English hometown. She’s overwhelmingly shy yet gifted with a cutthroat imagination. Thanks to her “Morbid Preoccupation,” Aggie is nearly unfazed when she discovers a corpse at her dancing lesson. But when two of Aggie’s favorite people are suspected of the murder, she is determined to learn the truth. With the help of a Belgian refugee boy named Hector Perot, Agatha must find the real killer even if her mother, the constables, and an eager journalist all get in her way. A classic anonymous letter made of letters cut out of newspaper must be a key clue, surely. Fictionalizing both the author Agatha Christie and her famous creation as characters in the same mystery is an infelicitous choice at best. Within the world of the tale, Hector adds little; Aggie is the real detective of the pair. Nonetheless, myriad little touches keep this both exciting and enjoyable. Aggie’s grandmother is funny and quite saucy. The girl’s grief over her recently dead father manifests genuinely: as sudden flashes of grief, as irritation with his financial mismanagement, and as fond recollections of the delicious cake that had appeared in the wake of his death.

The protagonist makes a remarkable, cool, and likable detective despite some literary dead weight.