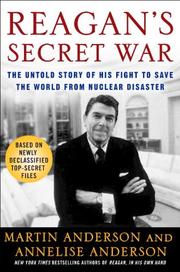 by Martin Anderson and Annelise Anderson

The Andersons—who have already proven that Reagan wrote more gracefully than previously suspected (Reagan: A Life in Letters, 2003, etc.)—seek to dispel the notion that Reagan slept through his presidency, an “amiable dunce” fortunate to occupy the Oval Office while the Soviet Union imploded. Using memorandums of conversations, transcripts of summit meetings, letters, drafts and final versions of speeches, Reagan’s personal diary, press-conference transcripts and newly declassified National Security Council minutes, the authors demonstrate Reagan’s obsession, which predated his presidency, with the nuclear threat and his determination to do something about it. More tellingly, these documents prove that Reagan’s voice was the guiding intelligence behind his administration’s strategy for besting the Soviets. Oftentimes ignoring or overruling his advisors, even dismissing high-profile appointees—including Secretary of State Al Haig—who failed to implement his policy, Reagan strove to right the economy, bolster the military and, most controversially, push the idea of a Strategic Defense Initiative to persuade the Soviet Union that it could not possibly win an arms race with America. Although the Andersons allude to events that distracted Reagan—assassination attempt, re-election campaign, the Iran-Contra scandal—the focus remains on the president’s single-minded determination to fashion a world without nuclear weapons. Although their commentary occasionally lapses into cheerleading—Nancy Reagan’s repartee with Andrei Gromyko can hardly be described as “sophisticated”—the authors allow these remarkable documents to speak for themselves.