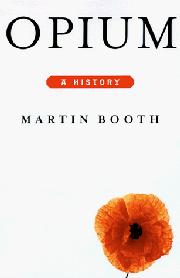 This comprehensive opium chronicle is a worthy addition to the recent rush of compendia that seek to place commodities (e.g., oil, potatoes, corn) in their full historical/social context. Opium’s healing properties were long known to the ancients, as were its pleasant stupefactions and addictiveness. Eaten, infused, or smoked, purified into morphine or heroin, it has long been a favorite narcotic of both East and West. It inspired poets and artists, sustained economies, fueled wars and imperial conquests, brought relief from pain to millions, yet also ravaged innumerable lives. Opium helped Coleridge produce some of his best poetry (“In Xanadu did Kubla Khan a stately pleasure dome decree”); brought about armed hostilities between England and China (leading to the ceding of Hong Kong); financed an unhealthy portion of the Vietnam War; and killed more than its fair share of rock musicians. In fact, heroin makes up a major portion of the illegal global drug market, whose sales of $500-plus billion a year exceed the GNP’s of 90 percent of UN members. As with most commodity histories, this one concerns not so much a substance as the devastations of our pleasures—the folly, greed, and grandeur of human behavior. From the subtleties of Chinese history to the complexities of Golden-Triangle narco-nationalism, novelist and screenwriter Booth (Dreaming of Samarkand, 1990, etc.) shows a sure grasp of his material and manages to pull the innumerable and far-flung threads (almost) neatly together. While any grand Åber account like this is bound to commit some omissions and under-emphases (perhaps we needed more on heroin chic, more on the roots of addiction, more on famous junkies, and more on the modern —war on drugs—), Booth’s mind is unusually encyclopedic. However, he does tend to editorialize and moralize (gawkily), making certain sections unnecessarily Sunday-schoolish. Not quite intoxicating, but good for at least a pleasant buzz.