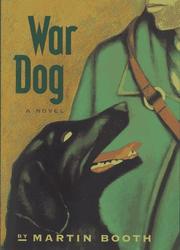 In his first novel for young readers, Booth (Dreaming of Samarkand, 1990, etc.) introduces Jet, a black Labrador hero in the tradition of Rin Tin Tin. After Jet's owner is jailed for poaching game, the dog is enlisted in the British Armed Forces. This isn't as crazy as it sounds; the preface reminds readers that many animals have been requisitioned in times of war. World War II is brewing in Europe and Jet proves to be the perfect military trainee. She is sent to combat with her new ``handler'' in France, where her duties include sniffing out the enemy and the wounded. When Jet herself is wounded, she serves her country in a different capacity by searching out people buried in rubble in a bomb-torn city. Soon, she's needed back in the front lines, where she is miraculously reunited with her original owner. Military buffs will relish the war details: This book has the feel of the black-and-white movies of the 1940s. All readers will be stirred by the heroic canine's adventures. (Fiction. 8-12)