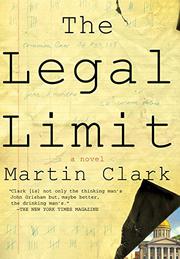 Two brothers and a murder are at the heart of this fine, meaty legal thriller from circuit-court judge Clark (Plain Heathen Mischief, 2004, etc.).

The author’s latest, based on one of his own cases, is set in his small hometown: Stuart, Va. It begins in 1984. Gates Hunt is 27 and his kid brother Mason is 24. Their father Curt, mean as they come, used to wallop them mercilessly; he made life hell for his long-suffering wife Sadie Grace, too, before finally disappearing. Gates had protected Mason, hence the “visceral, epic connection” between the brothers. That explains why the decent, hardworking Mason covers for the shiftless Gates when he shoots another man dead. The victim had been fooling around with Gates’s girlfriend, and there was a late-night confrontation on a deserted country road, Mason the only witness. He gets rid of the gun and the case goes cold. Years pass. The no-good Gates is busted for selling drugs to an undercover state cop and draws a long prison term. Mason becomes a successful lawyer in Richmond and marries; he and wife Allison are a devoted couple. He returns to Stuart as an attorney; then Allison is killed in a car crash, leaving Mason to raise their daughter alone. It’s not until 2003 that the murder case is reopened. Gates, desperate and hoping for a pardon, accuses Mason of the crime; a special prosecutor is appointed, and Mason is indicted. Clark ratchets up the drama with two electrifying scenes: Sadie Grace smiting and disowning her son, and the brothers, by now the bitterest of enemies, slugging each other. Clark’s key point is the potential gap between the law and true justice, into which a good person can fall. Ultimately, everything pivots on an obscure Latin writ.

A masterful mix of legal arcana and white-knuckle suspense, with a dollop of dirty pork-barrel politicking for good measure.