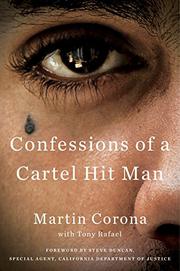 CONFESSIONS OF A CARTEL HIT MAN

Account of a reformed gangster’s employment with the Arrelano-Felix Brothers drug cartel.

A foreword by California Justice Department Special Agent Steve Duncan sets up Corona’s unusual confessional. He explains, “Corona [was] a member of the ‘Death Squad,’ a special group of cartel enforcers with tactical ability.” In the aftermath of the brothers’ notorious 1993 airport murder of a Mexican cardinal, American law enforcement successfully indicted Corona’s generation of cartel killers. Corona made a deal with prosecutors; Duncan notes, he “testified to each murder in Federal Grand Jury often times crying as he recounted the details to jurors.” This book supposedly stems from the same redemptive impulse. Corona writes of his California childhood, where, despite a strict but stable upbringing in a military family, he was attracted to gang life from an early age, dealing drugs on the beach at age 13: “Even though I was technically a Posole home boy, I made it a point not to dress like a gangster.” He was soon sent to the California Youth Authority, which is “basically the farm team for the Mexican Mafia.” As Corona was reincarcerated between criminal schemes, his involvement deepened in the harsh, regimented subculture of Mexican gangs, revolving around bloody conflict between northerners and southerners. In 1992, one such prison connection led him to employment with David Barron, an infamous cartel enforcer. The author takes readers on a violent ride, but many characters are only identified with street names, blurring the narrative. Although he writes of his regret, Corona’s storytelling still glamorizes gang life, with its focus on honor and loyalty expressed through violence. His memoir has a seedy authenticity regarding the nitty-gritty of how gangsters thrive in prison, prepare and transport weapons, stalk targets, and so forth. But Corona’s prose relies on clichés and pulpy digressions.

An unusual, self-aggrandizing, ground-level look at the dangerous milieu of Mexican cartels.