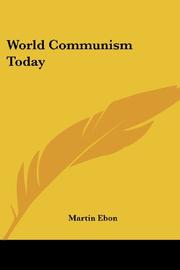 This is an important book. One could wish it were easier and livelier reading. Such tremendous scope in a book of limited size results inevitably in a sense of its being a cursory survey, lacking in the color and drama and sense of individuality that characterized Lehrman's Russia's Europe (see P. 589) -- but read in conjunction with that book, this considerably extends one's understanding of the progress of world communism. Objective-dispassionate -- the effect is attained by sheer weight of evidence as he covers country after country, showing how the strategies varied, as the dissolution of the Commintern brought a new approach- the united front -- into operation, with greater flexibility as to its attainment. From Eastern Europe (covered in the Lehrman book to the same end), he turns to Western Europe, showing how each country has its particular development of strategy, now alignment with labor, now divorced from it, now advanced, now approaching the goal circuitously. Scandinavia offers the most heartening opposition; Ireland is impervious and unaware; in Great Britain, in Italy, in Iceland- anti-American feeling is one of the symptoms. Everywhere, poverty, hunger, lack of security provides fertile soil. Next the Western Hemisphere, with the Canadian espionage case as spring-board, and more of human interest in hints at colorful stories of Soviet spies:- Canada, the United States, Central and South America. Then to the Orient and to Africa- glimpses of slow awakening- and a chance for propaganda to bear fruit in dissatisfaction and disillusionment, except in Australia and New Zealand, where an advanced form of government holds firm control. In the Near East- Palestine offers a powder keg- though the role of the Soviet is uncertain. The challenge is summed up -- Communism is defined as a modern cult rather than an economic school of thought, and the forces arrayed against it are analyzed, with the Catholio Church as the spearhead. We must offer security with liberty, bread with freedom -- we must act before a new depression takes stranglehold. Economic cooperation linked with political intervention, and the building of a prosperous middle class, will achieve more then negations and denials....Ebon speaks from a background of the State Department, the OWI and the Foreign Policy Association.