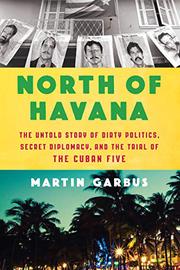 The Untold Story of Dirty Politics, Secret Diplomacy, and the Trial of the Cuban Five

An account of the anti-Castro hatred that infected 1990s Miami.

In 1996, a Cuban jet fighter downed a plane flying over Cuban airspace dropping anti-Castro leaflets, a mission sanctioned by Miami’s right-wing Cuban exiles. Immediately, the enraged Cuban community called for justice, and five men—none of whom had been in Cuba at the time—were arrested, tried, convicted for spying, and imprisoned in the United States. One of them, Gerardo Hernández, received 2 life sentences. Ten years later, eminent trial lawyer Garbus (The Next 25 Years: The New Supreme Court and What It Means for Americans, 2007, etc.), after reading more than 20,000 pages of trial transcript and “a mountain of connected documents,” decided to represent Hernández to reverse his conviction, convinced that his client was innocent and had been denied a fair trial. By the time he took the case, Garbus already had a distinguished career defending prominent dissidents, including Daniel Ellsberg, Cesar Chavez, and the Cuban poet Heberto Padilla. Although he realized that Hernández’s case was “nearly hopeless,” he admits that “by psychology, instinct, and training, I respond to injustice by running toward it, to see what I can do to correct it.” The trial of the Cuban Five, as the defendants came to be known, was rife with misconduct: an inexperienced judge who rejected six motions for a change of venue, forcing the trial to proceed in a community “actively organized against the defendants”; inflammatory pre-trial publicity that amounted to a “propaganda crusade”; ineffective defense strategy; and an inevitably biased jury. Garbus chronicles his efforts to win justice for Hernández, a combination of dogged work, luck, surprising new evidence, and an evolving political climate in which a thaw in Cuban–U.S. relations seemed possible. He movingly portrays the pain, degradation, and hardship his client experienced as well as his own frustrations with prison officials who “complicated and interfered” with his work in every way possible. His impassioned book is both an indictment of the legal system and a plea for prison reform.

A harrowing chronicle of a fight for justice.