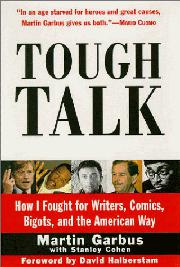 How I Fought for Writers, Comics, Bigots, and the American Way

by Martin Garbus with Stanley Cohen

A memoir so engaging that one wishes it were longer. For 40 years, Garbus (Ready for the Defense, 1971) has been one of our premier lawyers in the fields of First Amendment, publishing, and copyright law. He defended Lenny Bruce in one of the obscenity trials that drove the stand-up satirist to death; turned back the libel suit that delayed publication of Peter Matthiessen’s book on the Wounded Knee shoot-out; advised Daniel Ellsberg on bringing the Pentagon Papers to public attention; negotiated Spike Lee’s purchase of the Rodney King tapes for use in the film Malcolm X; represented Samuel Beckett when the Nobelist felt that a US theater company had altered the meaning of his play Endgame; and was Prodigy’s attorney in one of the first major “cyberlaw” cases. Publishing clients dropped Garbus after he helped John Cheever’s family enjoin publication of the author’s unpublished early stories, and his fellow libel lawyers turned on him when he represented a rape victim who was unjustly accused by a columnist of fabricating her story. He went to Prague in 1979 to defend Vaclav Havel against a charge of subversion; ten years later, he returned to help draft the new democracy’s constitution. Along the way, he brought seminal lawsuits on behalf of welfare recipients in the 1960s and was shot at while aiding Cesar Chavez. Garbus and co-author Cohen (The Man in the Crowd, 1981) are especially deft at laying out complex legal issues for the general reader. Disappointingly, Garbus says little about what seems to have been a fascinating personal life; in particular, his growth from a timid youth convinced that he would spend his life in his father’s Bronx candy store might have been fleshed out to the reader’s pleasure and instruction. A fine read for anyone interested in the interaction of law and public life.