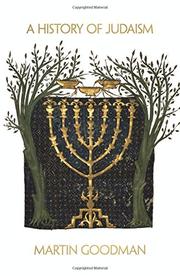 A HISTORY OF JUDAISM

An expansive and fascinating history of Judaism.

Goodman (Jewish Studies/Oxford Univ.; Rome and Jerusalem: The Clash of Ancient Civilizations, 2007, etc.) has crafted a worthy addition to the wide-ranging genre of Jewish studies, offering a hefty yet accessible historical overview of the Jewish religion. Acknowledging at the outset that his great challenge was to choose a starting point, the author wisely begins with the writings of Josephus (37-100 C.E.), who acted as a singular witness to a watershed change in Jewish history: the destruction of the Temple in Jerusalem. Indeed, the author is so convinced of the importance of the first century of the Common Era that he does not move past it until a third of the way through the book. His decision to dig so deeply into this short window of time makes sense, however, and sets the stage for the rest of the story, as the loss of the Temple, the rise of the synagogue, the furtherance of the Diaspora, and the birth of Christianity would all color Jewish history for centuries to come. A number of themes unfold as readers journey through Goodman’s work. Perhaps chief among these is that at almost every stage in its history, Judaism was shaped by other cultures, religions, and movements. Even at its most entrenched, Judaism was and is reacting to other pressures, such as modernity. The author skillfully points to the seemingly endless conflicts and connections Judaism has had with other forces through history, from Hellenism to Rome, Byzantium to the Enlightenment, anti-Semitism to Zionism. Goodman also parses out the many forms that Judaism has taken throughout the past 2,000 years, beginning with Pharisees, Sadducees, and Essenes in the first century and ending with Reform, Conservative, and Orthodox, and their many manifestations, in the 21st.

Well-written and exhaustively researched, Goodman’s work is a masterpiece of pedagogy crafted as a tool for teaching and learning about one of civilization’s oldest religions.

ROME AND JERUSALEM
by Martin Goodman

WHY WE REMAIN JEWS
by Vladimir Tsesis
Nonfiction

PRINCE OF THE PRESS
by Joshua Teplitsky
Nonfiction

WE WERE THE FUTURE
by Yael Neeman
Nonfiction

THE ORIGIN OF THE JEWS
by Steven Weitzman
Nonfiction