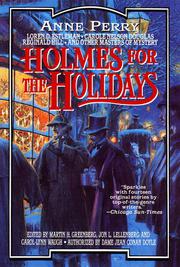 HOLMES FOR THE HOLIDAYS

If the prospect of 14 pastiches all featuring Christmas and Sherlock Holmes makes you queasy, take heart: Everyone involved produces professional, if not exactly inspired, work. It's a treat to see Irene Adler's chronicler, Carole Nelson Douglas, present a jewel theft from Watson's point of view for a change, and her mastery of Watson's voice is rivaled by that of Reginald Hill (Holmes and Watson invited to witness a Roman execution) and Jon L. Breen (a talking dog). Anne Perry begins the collection on a suitably atmospheric note; Loren D. Estleman and Bill Crider put two different spins on the Scrooge affair; Edward D. Hoch's blackmailer puts the bite on Lewis Carroll; John Stoessel, in a deceptively clever puzzle, has Watson solve a case (the stabbing of Inspector Lestrade) on his own; and Gillian Linscott's Swiss holiday shows Holmes and Watson from a charmingly novel point of view. The most elaborate cases, however, are William DeAndrea's stolen Christmas tree and Carolyn Wheat's richly detailed salute to ``The Five Orange Pips.'' No entry threatens the preeminence of ``The Blue Carbuncle.'' But readers who find Holmes here repeatedly more impressive at tossing off casual inferences than at solving cases should consult Conan Doyle, in whose hands he often behaves much the same.