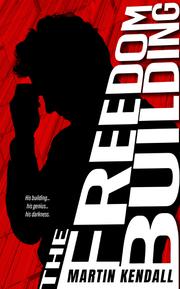 An architect wakes up unable to remember the last three years—the most successful of his career—in this debut novel.

When the Zenith Star building in downtown Blanworth is destroyed in a terrorist attack, local architect John Gowan isn’t overly upset. In fact, John jokes that it was probably an architect who blew up the ugly glass tower. He wonders who will get the contract to build the replacement, though his partner, Pete Williams, assures him it will be a bigger firm than theirs. Even so, John begins to fantasize about the building he would put on the site if given the chance. Following a car accident, John awakes in a hospital bed, assuming a day has passed at most. It turns out that it’s actually been three and a half years. But John hasn’t been in a coma the whole time: During the elapsed period, he actually managed to win the contract to replace the Zenith Star building. “Three and a half years ago,” he reads incredulously in the newspaper, “after the destruction of the old Zenith Star building, the little-known architect John Gowan had a dream to design a new building that might not only restore Blanworth’s city skyline” but revolutionize it. The new construction based on his design is scheduled to begin that same day. John simply has no memory of any of it. What’s more, when he tries to look at the image of his design in the paper, his vision becomes blurry. In fact, when he attempts to look at any blueprints or specs of the building, he is simply incapable of seeing them. Struggling to keep his condition a secret, John sets out to discover exactly what happened to him to cause him to lose his memory, unveiling a mystery that is much deeper than any terrorist conspiracy. Kendall has concocted a nifty little puzzle, reminiscent of a plotline from The Twilight Zone or perhaps Black Mirror. But as pure literature, the book is somewhat problematic. The author attempts a heightened prose yet ends up using odd words and causing comprehension difficulties: “The town was set in a valley, and its dirty streets reflected a pale spring sun that scattered deadweight over the town. Red brick slums oozed false pride onto the entrapped town centre. Those who earned enough fled to the far-reaching countryside.” John is a flat and unlikable character, and while readers will be curious about what has caused his amnesia, they will have little affection for him personally due to his vanity and lack of empathy for others. He undergoes no Scrooge-like epiphany by the end; rather, the opinion of the author seems to be that John simply didn’t believe in himself enough (though even on this point, things aren’t clearly articulated). The lack of a compelling emotional core undermines the captivating premise, causing it all to feel like a thought exercise more than an immersive human experience. A book that clearly wants to be about something ends up being about not very much at all.