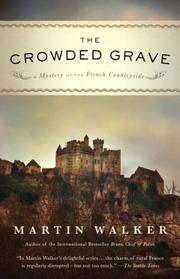 A terrorist is introduced to Dordogne foie gras.

St. Denis Chef de Police Benoît “Bruno” Courrèges (Black Diamond, 2011, etc.) has his hands full. An unidentified corpse shot some 20 years ago has been found at the site of an archaeological dig. Two of the foreign students there, Teddy and Kajte, may be involved in a case of animal-rights vandalism. And a secret summit meeting of Spanish and French ministers may be targeted by Basque terrorists. While Bruno’s English girlfriend Pamela flies home to deal with her mother’s stroke and her ex-husband, Bruno’s former Paris-based girlfriend Isabelle, recovering from a wound inflicted on the job, returns to St. Denis with other governmental bigwigs to supervise the summit. PETA leaflets appear. Dynamite caches are rifled. A Spanish minister’s car blows up. The German archaeology professor responsible for the dig disappears. Teddy and Kajte scamper off. Worse, the farmers raising ducks for foie gras loathe the new magistrate, who thinks eating the stuff is barbaric. Then clues to that old cadaver crop up, indicating ties to the SS, the Baader-Meinhof Group and the Red Army Faktion. Cover stories are uncovered. Good guys turn out to be bad. Bruno’s longtime companion, a basset hound, dies a heroic death. And Bruno manages to deal with everything and still have time to make a mouthwatering lamb stew, savor a Perigord foie gras snack and enjoy a really nice glass or two of wine.

Another delicious romp through a French menu garnished with politics.