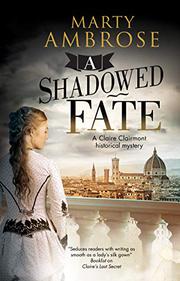 The second case for an old flame of Lord Byron’s (Claire’s Last Secret, 2018) sends her chasing the ghosts of the romantic poets across Italy.

Claire Clairmont is spending the autumn of her years in genteel poverty in Florence with her niece, Paula, and great-niece, Georgiana. Claire clings to the memories of Byron and their love child, Allegra, both now dead—or so she thinks. She starts to question everything she believes about the past the day her old friend and former paramour Edward Trelawny returns from the wars with a legacy and a secret, both from Byron. The bequest is a sketch of the Boboli Gardens by the great artist Giuseppe Cades, the sale of which could make Claire’s family comfortable. The secret is that Allegra did not die of typhus at age 5, as history records. As proof, Trelawny offers Byron’s memoirs—a hitherto unknown copy of the manuscript burned upon his death. Claire and her family set out to celebrate their good fortune with antipasti and Chianti. While they’re gone, a burglar ransacks their home and steals the Cades sketch. After a fruitless police inquiry, Claire takes it upon herself to interrogate Matteo Ricci, an old nemesis who’s imprisoned for murdering a priest to get his hands on some of Claire’s other valuable memorabilia of Byron and Shelley, on suspicion of masterminding the Cades theft. Ricci is supercilious and unhelpful, so the party sets out for the convent where Allegra spent what might not have been her final days in hopes of learning the truth about her fate. Instead of gathering all possible information before undertaking their journey, Claire chooses to read Byron’s memoir in bits and pieces along the road. The memoir reveals Byron’s revolutionary activities in Ravenna and the threats on his life, and Allegra’s, that may have induced him to fake her death for her own safety. A shadowy rider tracks their carriage on the road to the convent. Will they recover the sketch, find Allegra, and heal Claire’s grieving heart? Stilted prose studded with gratuitous Italian, unformed characters, and an unsatisfying ending make this strictly for devotees of fan fiction.

More a travelogue than a mystery, gilding the lily with clichéd praise for Byron’s prowess and Italy’s beauty.