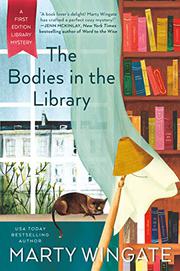 THE BODIES IN THE LIBRARY

A curator of a collection of rare mysteries solves a puzzle of her own.

A degree in 19th-century literature doesn’t open many doors, Hayley Burke discovers, and those that do open seldom lead to treasure troves. So when her stint as assistant to the assistant curator of the Jane Austen Centre in Bath doesn’t quite cover expenses, Hayley thinks herself lucky to be offered the position of curator of The First Edition Society. Founded by the late Lady Georgiana Fowling as a repository for her vast collection of mystery novels, the society hasn’t quite decided whether it’s a library, a social club, or an educational institution. What it clearly is is Hayley's home, since the job offers both Hayley and the society’s secretary, Glynis Woolgar, apartments in Middlebank House, the spacious mansion that houses the late Lady Fowling’s collection. In an effort to expand the society’s profile, Hayley also opens Middlebank House to the weekly meetings of a local writers’ group that specializes in mystery fan fiction. But the morning after a particularly contentious session pitting writers of Agatha Christie vampire mashups against creators of Agatha Christie zombie pastiches, the corpse of Tristram Cummins is discovered in the library. Now Hayley’s job is on the line, as the tabloids move in and the board of directors suddenly finds the society’s profile a little too high. Even worse, Charles Henry Dill, Lady Fowling’s rapacious nephew, discovers that Hayley hasn’t read most of the authors featured in his aunt’s collection. Alarmed, Hayley gets down to work, and only a few novels later, Wingate (Midsummer Mayhem, 2019, etc.) shows her channeling Miss Marple accurately enough to give the police a run for their money in unmasking a killer.

Not as tightly clued as a Christie original, this initial First Edition entry still gives readers what they came for.