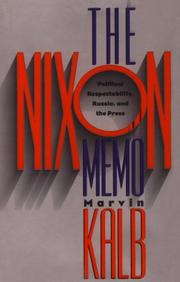 Political Respectability, Russia, and the Press

The distinguished former foreign correspondent for CBS and NBC news looks wryly and critically at a 1992 foray into foreign policy by Richard Nixon—and along the way, shows how politicians and press pundits manipulate one another to shape political consensus. Despite Nixon's antagonism to the press, his public life was pervasively shaped by the media, from the 1952 Checkers speech through the Watergate scandal. Nixon had an impact on presidential relations with the media in turn, forging through his wiretaps and enemies lists a hostile relationship between the White House and the press that has lasted until today. Kalb (Press and Public Policy/John F. Kennedy School of Government, Harvard; In the National Interest, 1977, etc.) points out that Nixon's final attempt to influence public policy was a clever manipulation of the press. On March 10, 1992, he wrote a private memorandum attacking George Bush's policy toward Boris Yeltsin's Russia. Nixon distributed the memorandum to approximately 50 influential Americans hoping, Kalb suggests, that the memo would be leaked to the press. It was, and appeared on the front page of the New York Times, disrupting the foreign policy of the Bush administration and personally embarrassing Bush, then engaged in a campaign for his party's presidential nomination. In exploring why Nixon deliberately tried to undermine a Republican president's foreign policy, Kalb explains how Nixon artfully used the press to effect his political rehabilitation. Journalists, in their quest for a good story, cooperated with Nixon. As Kalb points out, Nixon, a politician whose rise began with his attacks on Democrats for ``losing'' China in the 1950s, ended his career by threatening both Democrats and Republicans with blame for ``losing'' Russia in the 1990s. Kalb presents the story of Nixon's rehabilitation as great and appalling copy, and gives the reader an illuminating peek into some of the darker recesses of the world inside the Beltway.