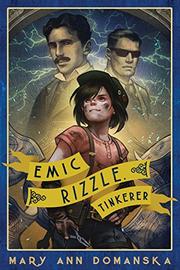 In Domanska’s debut adventure for middle-grade readers, a gadget-loving girl discovers that her grandfather was a spy in World War II—and that he knew about a secret invention.

Emily Michael Rizzle, nicknamed “Emic,” loves to pull devices apart, see how they work, and make new ones. She takes after her beloved grandfather, Gregor Rizzle, who died four years ago, when Emic was 8. He was a colonel in World War II, spoke five languages, and said strange things about someone named Tesla and a “free-energy generator.” Emic still has the musty old journal that Gregor gave her with “Nikola Tesla” written on its inside cover. “Keep it safe, child,” he told her. “This book could change the world.” Since then, she’s kept her promise and continued tinkering; largely as a result of her efforts, her sixth-grade robotics team won first prize. But now her family is moving from Chicago to Flat Rock, North Carolina, and in the middle of the school year. Luckily, she meets some kindred spirits there, including the lanky, sarcastic Dublin, who loves British slang. Emic enlists his help in figuring out some strange items, such as a tiny camera from her grandfather’s cigar box, which was discovered in the recent move. Meanwhile, three men in dark suits seem to be following Emic. What are they after? Could her grandfather have been right? Domanska gives readers a delightful heroine in Emic: she’s warmhearted, loyal, smart, clever, and determined to be herself. She also dresses in a trademark mix of contrasting colors and patterns, mixed with vintage pieces, such as her grandfather’s Distinguished Service Cross. Emic knows she stands out, but she thinks, “This is me! This is what I like! Deal with it!” Domanska also provides nice details about Emic’s family situation and illustrates her tinkering well (drat that melted plastic capacitor!). Although spy-thriller plots in YA fiction usually beggar belief, this one is handled fairly realistically: Emic and Dublin have some exciting adventures with a great payoff, and the ending still leaves room for Emic to change the world.

Let’s hope for more from Domanska, as Emic the inventor is a very appealing invention herself.