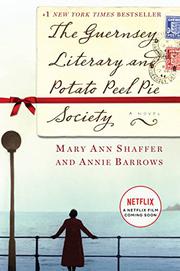 The German occupation of the Channel Islands, recalled in letters between a London reporter and an eccentric gaggle of Guernsey islanders.

This debut by an “aunt-niece” authorial team presents itself as cozy fiction about comfortably quirky people in a bucolic setting, but it quickly evinces far more serious, and ambitious, intent. In 1946, Juliet, famous for her oxymoronic wartime humor column, is coping with life amid the rubble of London when she receives a letter from a reader, Dawsey, a Guernsey resident who asks her help in finding books by Charles Lamb. After she honors his request, a flurry of letters arrive from Guernsey islanders eager to share recollections of the German occupation of the islands. (Readers may be reminded of the PBS series, Island at War.) When the Germans catch some islanders exiting from a late-night pig roast, the group, as an excuse for violating curfew and food restrictions, invents a book club. The “Literary and Potato Peel Pie Society” is born, affording Guernseyites an excuse to meet and share meager repasts. (The Germans have confiscated all the real food.) Juliet’s fractious correspondents, including reputed witch Isola, Booker, a Jewish valet who masquerades as a Lord, and many other L&PPPS members, reveal that the absent founder of their society, Elizabeth, loved Christian, a German captain. No one accuses Elizabeth of collaboration (except one crotchety islander, Adelaide) because Christian was genuinely nice. An act of bravery caused Elizabeth’s deportation to France, and her whereabouts remain unknown. The Society is raising four-year-old Kit, Elizabeth’s daughter by Christian. To the consternation of her editor and friend, Sidney, Juliet is entertaining the overtures, literary and romantic, of a dashing but domineering New York publisher, Markham. When Juliet goes to Guernsey, some hard truths emerge about Elizabeth’s fate and defiant courage. Elizabeth and Juliet are appealingly reminiscent of game but gutsy ’40s movie heroines.

The engrossing subject matter and lively writing make this a sure winner, perhaps fodder for a TV series.