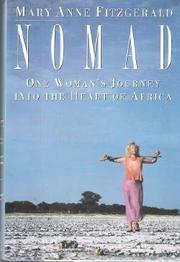 One Woman's Journey into the Heart of Africa

Fitzgerald—born in Africa but now living in Britain—makes her American debut with this sometimes offbeat yet still wrenching account of the many pestilences ravaging Africa. As the African correspondent for the London Times and the Independent, Fitzgerald, along with her two daughters, had long made her home in Kenya. But in 1988, she was deported on what she says was a fabricated charge, almost certainly a result of the pieces she had written criticizing Kenyan leader Daniel Moi. This abrupt rupture provoked ``a situation so awful that `mid-life crisis' was an inadequate description,'' forcing Fitzgerald and others like her to become ``nomads travelling an uncertain route.'' Heeding Pascal's reflection that travel diverts us from despair, she made London her base and became a correspondent for the British Sunday Times. Here, she discusses Kenya's widespread human-rights abuses and corruption: A typical experience was that of the Danish government, whose $40 million gift to establish a rural development program disappeared without a trace; the war and famine in Ethiopia, ``where a sinister war machine was steamrolling back and forth across the carcass of a ravaged land''; the problems of poaching in the Central African Republic, an angry place that ``had known only dictatorship and dependency''; and the nasty war in Liberia, where atrocities turned entire towns into morgues. Paralleling these stories is her own personal odyssey, including visiting traditional healers, acquiring a fetish, and sacrificing a live chicken. Finally, Fitzgerald realized that ``home wasn't a place'' and, like the nomads, she was free—and ready to write this book. A riveting portrait of the endemic brutality and heartbreaking beauty that is the compelling paradox of contemporary Africa. (Eight pages of b&w photographs—not seen)