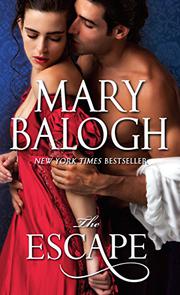 Sir Benedict Harper is struggling to find his place in the world after his wounds force him out of the army; in helping his neighbor Samantha McKay escape her stifling in-laws, he expects to feel satisfaction but may find salvation.

After nursing her needy, difficult husband through a lingering illness to his death, Samantha hopes for a little peace but is thwarted by her sister-in-law’s oppressive visit, which demands rigid expectations during their mourning. When a slight transgression finds her under the ever tightening screws of her husband’s family, Samantha decides to travel to Wales, where her mother grew up. Under duress, she means to discuss her plans with Lady Gramley, her nearest friendly neighbor, but winds up meeting the lady’s brother instead. Unwilling to let Samantha travel alone, Benedict agrees to help her escape her in-laws as long as she agrees to let him travel with her and see her safely to her destination. Along the way, Samantha realizes how dire the injuries to his legs were and recognizes the determination and fighting spirit that allowed him to heal enough to walk again, albeit with canes. And once they reach her mother’s village, Samantha learns that many of her beliefs regarding her family were false, at first to her outrage, then to her slowly building sense of hope and possibility. Meanwhile, as feelings grow on both sides, Samantha and Benedict are wary of expressing themselves for fear of unworthiness and unrequited affection. However, Samantha’s reunion with her family may offer new opportunities for Benedict, too, while giving the couple time to explore their ambitions and their emotions.