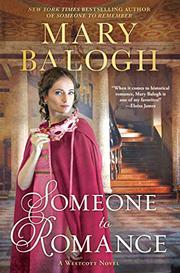 In a new, baggy Westcott family novel, Lady Jessica Archer demands romance and recognition of her inner self from an American newcomer to Regency London.

A brief encounter at an inn gives Jessica, the sister of the Duke of Netherby, and Gabriel Thorne, a merchant from Boston, an initial dislike of each other. But Gabriel has a secret about his identity, and he believes its eventual revelation requires that he have an aristocratic wife at his side—one he decides will be the patrician Jessica. At 25, Jessica is finally ready to marry. Yet she is unenthusiastic about her choices until two men, including Gabriel, show an interest. Gabriel is a hard character to like, however, because of his deception about who he is, his odd choice to remain in London despite the need to rescue a needy family member in the country—and the troubling implications of the fact that he has made money in shipping in pre–Civil War America. Even when his motivation for staying mum about his true identity is revealed, one struggles to feel sympathetic since he seems to prioritize his own griefs over the wrongs done to a woman. His past suffering and Jessica’s desire for him serve to justify her falling in love, but despite some tender moments, the relationship feels contrived. It’s an anomaly in Balogh’s usually deft unpacking of human weakness and worth, better displayed in Someone To Remember (2019). Similarly, Gabriel’s relatives are two-dimensional, with one being a virtuous disabled person mainly meant to show Gabriel in a positive light. As in many novels in this series, the plot gets bogged down by the backstory and crowded by all the Westcotts who show up insistently. The conclusion turns into something of a comedy of humors and has a deus ex machina twist that resolves matters.

An indifferent addition to the long-running series about British aristocrats and their romantic and financial concerns.