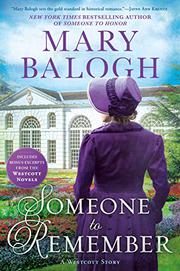 A Westcott novella that celebrates the second-chance love of a couple in their 50s.

Nondescript spinster Matilda Westcott temporarily abandoned her typical role as the backdrop for her aristocratic Regency family to bring about the happy ending of Someone To Honor (2019). Here, Balogh gives her a romance of her own with a former suitor 36 years after she turned him down (like Anne Elliott in Jane Austen's Persuasion). Charles Sawyer, Viscount Dirkson, is surprised to learn that he still has feelings for his first love, whom he thought he had forgotten soon after she rejected his marriage proposal. Now a grandfather with a newly forged connection to the Westcotts, he finds himself reestablishing their connection in the hope of a new outcome. Matilda, who had convinced herself that she made the right decision as a young woman, finally faces her own cowardice—a realization aided by her mother’s apology for having advised her wrongly. Surrounded by a supportive extended family, she must decide if her youthful love has truly withered or she is willing to let it flower in her middle age in defiance of public mockery. The on-the-shelf heroine’s growth into a full-fledged person will not surprise anyone who knows the author’s ability to reframe women characters. This novella is introduced by a letter from Balogh explaining the development of the Westcott family series and summarizing each of the earlier novels, and the book ends with excerpts from each of them. While these may help new readers or refresh the memories of those who have forgotten the details, others may be put off by what could be perceived as padding.

Wistful yet hopeful, the story is a needed addition to a genre that usually celebrates the romances of younger protagonists.