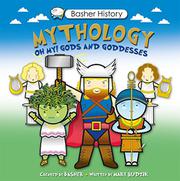 Oh My! Gods And Goddesses

From the Basher History series

by Mary Budzik ; illustrated by Basher

In Basher’s latest set of breezy “self”-portraits, 58 gods, demigods and mythological creations of diverse sort step up in turn to the microphone.

The entrants are limited to the ancient Egyptian, Norse and Greco-Roman pantheons and arranged in no particular order within their respective chapters. They range from the usual celebrities like Poseidon (“rhymes with ‘Joe Biden’ ”), Odin and Osiris to some who have gotten less press, such as Hebe—“Waitress to the Olympians”—and Gefjon, Aesir goddess of plowing. Along with mixing in such non-Olympians as Odysseus, Budzik swells the ranks by lending voices to Bifrost, Yggdrasil and even the battle of Ragnarok. The author’s introductory claim that the gods gave mortals “something to believe in and ideals to aspire to when life was looking bleak” is massively disingenuous considering the speakers’ own accounts of their exploits (Hel complains, “It’s really grim here. I get the dreariest dead”). Nevertheless, the sex and violence are toned down to, for instance, Hera’s tart reference to “my hubby’s mortal girlfriends” and Isis’ allusion to “complicated family vibes” (following her brother/husband Osiris’ dismemberment by their brother, Seth). In a radical departure for Basher, some of his dolllike cartoon figures bear grimaces rather than cutesy smiles.

More-systematic treatments abound, but the airy tone and quick-facts presentation give this some potential as a lighter-than-air refresher.