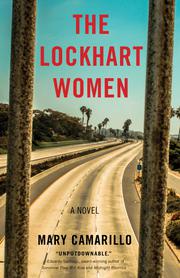 A family is thrown into chaos in 1990s Southern California in Camarillo’s debut historical novel.

On June 17, 1994—the same day that O.J. Simpson fled police in a white Ford Bronco—Brenda Lockhart attends a party and learns that her husband, Frank, is having an affair. He soon moves out of their house, leaving Brenda to care for their two teenage daughters, Allison and Peggy, a task for which she isn’t very skilled—particularly as the household takes a financial hit. Practical, organized Peggy wants to be an accountant but ends up working with her father at the post office after she turns 18. She has an affair with an older co-worker who’s uninterested in commitment, and the fallout from the relationship further complicates her plans. Flighty Allison is dating a surfer named Kevin Nelsonthat none of her family members like, but that only seems to increase his appeal in her eyes. She lives with his family for a time, but Kevin is abusive, and Allison blames herself for his behavior. She also shoplifts and gets mixed up with Kevin’s family’s drug business—all of which eventually catches up with her. Throughout, Brenda obsesses over every detail of the Simpson case as more details are revealed, neglecting to shower or do household chores. All three women must find ways to navigate themselves out of difficult situations. Brenda comes off as judgmental and unwilling to compromise at first, and as a result, readers may find her cold and unsympathetic. However, as the novel progresses, she matures as a character, moving to a more affordable place to live, finding a job, and becoming a more attentive mother. The author uses the Simpson trial as an indicator for Brenda’s growth; by the time the verdict is rendered, she’s doing better for herself than when the legal proceedings began, and she’s less consumed by them. Peggy and Allison aren’t always likable, either, but they also learn to make better decisions, and the novel’s ending is a satisfying one.

An emotional portrait of three women dealing with unexpected change.