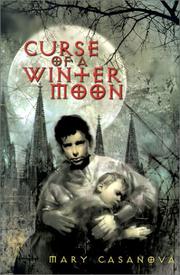 CURSE OF A WINTER MOON

Dark, medieval superstitions haunt the people of a French town in 1559. Marius’s little brother, Jean-Pierre, was born on Christmas Eve, and the townsfolk believe that all such children will become werewolves. Told from the viewpoint of the 12-year-old Marius, the story personalizes an intense moment in history when medieval forces reacted violently against the coming Reformation. Marius struggles with the constant task of protecting his six-year-old brother whom he knows the people will eventually attack; yet he also wants to begin his apprenticeship with his father as a blacksmith. He later learns that his father can read and has become a Huguenot, one damned as a heretic by the Catholic Church. Already hesitant to accept the town’s beliefs about evil, he begins to understand the true evil of superstition and repression when his father is captured and burned at the stake. Readers expecting a werewolf story will find a far more realistic and frightening tale that offers an intriguing counterpoint to the well-trod horror genre. Here the evil is not the supernatural, but fear of it. This brief tale works as an excellent, exciting introduction to a turbulent period in history. An afterword ties the real history of the period to the fictional story, with a bibliography for further reading. (Fiction. 9-14)