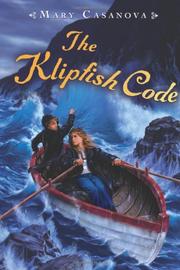 When the Germans invade Norway in the spring of 1940, ten-year-old Marit and her little brother Lars are sent to the tiny island of Godoy to live with their grandfather and aunt while their parents, an English teacher and an engineer, join the Resistance. Marit dislikes her cold grandfather but loves her aunt, and comes to an uneasy equilibrium with the German soldiers on the island. When she accidentally discovers an injured resistance member, she embarks on a perilous ocean trip to complete his mission—to exchange what looks like an ordinary compass for a bucket of klipfish, or codfish. Casanova details Norwegian life during the occupation uncommonly well—including the deportation of ten percent of Norway’s teachers for refusing to teach according to Nazi orders—but the pace of the story is uneven, with a bit of a deus ex machina ending as Grandfather takes them all off to the Shetland islands. Still, this is a worthwhile book about a rarely documented facet of the war that some readers will find fascinating. (Historical fiction. 9-12)