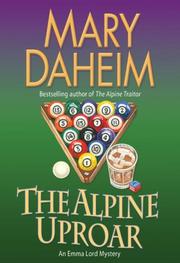 A tavern brawl winds up on the front page of a weekly newspaper.

Saturday night at the Icicle Creek Tavern turns rowdier than usual when Alvin De Muth winds up dead under the pool table, knocked there, so it’s said, by Clive Berentsen, who’s taken into custody by Skykomish County Sheriff Milo Dodge. Though Emma Lord, owner/editor of The Alpine Advocate, sends her new hire to cover the arraignment, all the important details are already available from Vida, the House & Home editor who knows everybody and everything. Half the town was in the tavern that night, and half of them had a reason to want De Muth dead, including a drunk or two, a fellow trying not to drink and his ex, her current husband, the owner of the local body shop, the mailman, the florist and, of course, the tavern owner himself. Emma and Vida, who have gotten into a few dust-ups themselves (The Alpine Traitor, 2008, etc.), don’t consider this open-and-shut case shut. Neither does Milo, who sends the deceased for a second autopsy, just in case Clive’s blow, which no one actually saw him deliver, wasn’t the fatal one. Secrets will unravel; Vida’s kin will become personally involved; and more will die before Emma and the Advocate finally release the full story.

Even dolls named Cathy aren’t this chatty. But if small-town minutiae and insularity appeal to you, this is top of the line.