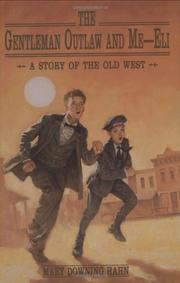 THE GENTLEMAN OUTLAW AND ME--ELI

A Story of the Old West

Colorful characterizations and high-spirited language carry this ripsnorting western. After the death of her mother, Eliza, 12, runs away from her cruel and unscrupulous Kansas relatives. She sets out with her faithful dog, Caesar, to find her father in the silver mines of Colorado; early on, in a stolen pair of overalls, she transforms herself into "Eli." Soon after she meets Calvin Featherbone, known as the Gentleman Outlaw, who has been shot and left for dead by a pack of scoundrels. A healed Calvin—who talks "like he swallowed a dictionary"—sets off with Eli for Tinville, Colorado, to shoot his sworn enemy, Sheriff Alfred Yates. The sheriff happens to be Eliza's father. Hahn (Look For Me By Moonlight, 1995, etc.) has written an amusing comedy of errors that derives much of its humor from Calvin's speech and manners and Eliza's wry asides alluding to her true identity as a girl. With plenty of twists and turns—and a cameo appearance by Doc Holliday—it's a real cowgirl triumph. (Fiction. 10-14)