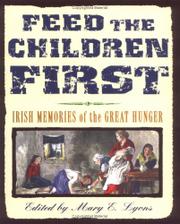 Irish Memories of the Great Hunger

In the summer and fall of 1845, a plant fungus hit Ireland. In the following seven years, one million people died and another one-and-a-half million people fled the country. It was one of the terrible disasters of the 19th century, the magnitude of which will surprise most readers. This first-person account of the time is derived from oral-history projects such as that conducted in the 1940s by the Irish Folklore Commission, which collected stories from children and grandchildren of survivors. Unlike the photographic record of American slavery and the Holocaust, no known photographs of the Great Hunger exist. Lyons combines oral history with paintings from the period and sketches made by newspapermen who traveled the country in 1847. Young readers may be confused by the inclusion of photographs when the author states in the first section that no photographs of the period exist; however, the photographs she uses date from the end of the 19th century, when the fungus struck again. This attractive volume seems insubstantial on its own but will make a good match with Susan Campbell Bartoletti’s recent Black Potatoes (p. 1419), which tells the story of the famine in greater depth. Lyons emphasizes that hunger is still a worldwide problem. In 1995, six million children under the age of five died from lack of nutritious food. As Lyons says, “The Irish famine is worth remembering when hunger organizations ask us to help them feed the children first.” This will be a useful volume for library collections on Ireland, immigration, cities, hunger, and the 19th century. (Web sites, bibliography) (Nonfiction. 9-12)