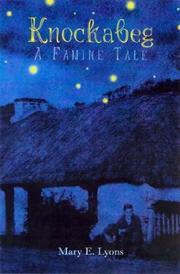 An author of historical fiction and nonfiction tries her hand in the faery world. The Good People or Trooping Faeries declare war on their enemies when they discover the evil Nuckelavees’ plan to take over all of Ireland by ruining the potato crop. Without potatoes as a food source, the mortal families won’t have food to leave out for the faeries, the humans and faeries will starve, and both will have to abandon the land to the Nuckelavees. Lyons’s human and spirit characters have distinct personalities, which serve to invest readers in caring about the survival of the faeries in the various battle scenes. Most interesting of all is Sticky, an oddly mysterious faery who is revealed to be an evil Solitary One serving out a five-year punishment among the Good People. She holds the fate of both the Trooping Faeries and the mortal family she loves in her hands, and not until the somewhat suspenseful end do readers discover whether Sticky will do the right thing. Narrated by a seanchaí—Gaelic for “storyteller”—this contains many colloquial expressions, some of which are defined in the glossary. Try giving this to lovers of historical fiction or fantasy; paired with Patricia Reilly Giff’s Nory Ryan’s Song (2000), readers will gain another perspective on the 19th-century’s Irish potato famine. (glossary, laws of Trooping Faeries physics, author’s note) (Fiction. 9-12)