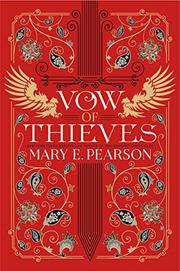 From the Dance of Thieves series, volume 2

Kazi and Jase’s trials continue in the sequel to Dance of Thieves (2018).

Elite soldier (and skilled thief) Kazi and Jase Ballenger, new head of his dynastic family, are madly in love and arriving back at Jase’s home of Tor’s Watch after a productive meeting with the Queen of Venda. They have good news for Jase’s people and are eager to share it, but a reunion with his family is not to be: A power-hungry schemer has taken over Tor’s Watch. He has years of simmering resentment fueling his rage, not to mention a band of mercenaries at his command. And now he has Kazi. Jase must rally his allies to bring down a truly vile and cunning villain, but don’t count Kazi out. She has a few tricks up her sleeve, although an old enemy lurks in the shadows. Readers unfamiliar with the first volume might get a bit lost, but those who like their fantasy dark, dark, dark will be thrilled, because there will be blood-buckets of it. Kazi and Jase’s every victory is hard won and their loyalty to each other, their family, and the people who depend on them never wavers. Pearson throws in lots of crowd-pleasing twists along with brutal, unflinching battle scenes and oodles of intrigue. Most main characters assume a white default.