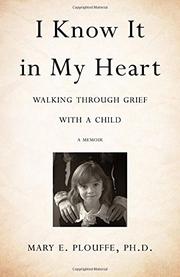 I KNOW IT IN MY HEART

Walking Through Grief with a Child

A veteran clinical psychologist examines cancer and a child’s grief in this debut memoir.

When her firecracker sister Martha was diagnosed with breast cancer, Plouffe believed she had the tools to deal with whatever happened, including the interminable machinations of the insurance company, the roller coaster of recovery and relapse, and the demands of a large family scattered across three states. Martha and her doctors played the numbers game, but only one number mattered to this mother of a 3-year-old: “I need twenty years to raise Liamarie.” And when a treatment designed to extend Martha’s life inadvertently ended it, Plouffe was forced to inspect not only her own grief, but also that of the newly abandoned child. The author tells not only the story of “how we got through the horror” of Martha’s death in the years that followed, but also “how we got back,” detailing family members’ exhausting emotional journeys as they attempted to heal and move on with their lives while managing Liamarie’s mental health as she grew from toddler to teenager. As a psychologist dealing with trauma on a daily basis, Plouffe found herself reiterating the received wisdom that “grieving is a two-year process” only to discover the advice as lacking in the glut of platitudes that met her in the wake of Martha’s death. She came to realize that “grief is not a broken heart...grief is a fractured soul,” and her striking tale is one of reconciling her career experiences with the agonizing reality of personal loss, told in a manner that wisely avoids sentimentality and embraces the warts-and-all irrationality of mourning. Where a lesser writer might lean into the darling precocity of Liamarie and offer the child as a panacea to the suffering, Plouffe uses an almost clinical examination of the girl’s development as a springboard to reconsidering her own attitude toward the grieving process. What results is a bracing and accessible account of the conflict between emotion and intellect.

A remarkable, empathetic, and intense exploration of the nature of grief and guilt, featuring searing personal insights as well as cleareyed professionalism.