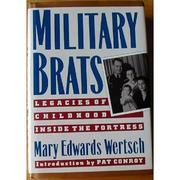 Legacies of Childhood Inside the Fortress

Having grown up in an Army family and thus a ``military brat'' herself, Wertsch is, in her own words, ``a journalist in search not only of ways to describe the roots I share with my subjects, but ways to understand those roots and their implications.'' Impelled to tackle the subject after a chance viewing of The Great Santini, a movie about a dysfunctional military family not unlike her own, Wertsch contends that not all military families are as troubled as the one in the film, but that all live in a separate subculture, marked by a strict class system, rigid discipline, extreme mobility, alienation from the civilian community, and a strong sense of mission. Alcoholism is high, family violence is not uncommon, and the father is frequently absent. Wertsch examines at length these factors, their psychological impact on children, and the adjustments made by military offspring as they grow up. Despite its many handicaps, a military upbringing also offers unique bonuses, and Wertsch stresses the particular strengths that military brats can, and often do, develop. In-depth interviews with 80 military brats— plus various social workers, psychologists, teachers, historians, and others—and quoted extensively; indeed, their revelations constitute a large portion of the test. The subjects were all born between 1932 and 1964, so their stories don't reflect the situation in today's all-volunteer military, with its much higher ratio of servicewomen. Although an attempt was made to include offspring of all ranks, the officer class seems to dominate in the interviews. Military families may have the most interest in (and stamina for) this 512-page portrait, but a more tightly edited version would have greater appeal to civilians.