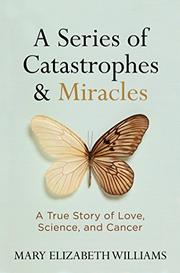 A SERIES OF CATASTROPHES AND MIRACLES

A True Story of Love, Science, and Cancer

Who would have thought a book about being diagnosed with stage 4 melanoma could be exhilarating and entertaining?

Salon.com senior staff writer Williams (Gimme Shelter, 2009) describes going to her dermatologist to check out a scab on her scalp. A biopsy indicated malignant melanoma that required immediate surgery that would leave a permanent bald spot. But it would also begin a lifesaving relationship with Memorial Sloan Kettering doctors. The spoiler at the beginning assures readers that instead of the usual monthslong life expectancy for stage 4 melanoma patients, the author is currently cancer free, even after her disease had progressed to metastases affecting her lungs and a spot on her back. Married and in her 40s with two daughters when she was diagnosed in 2010, Williams experienced all the anxiety, fear, anger, and sadness that come with such a diagnosis, but the writing never sinks to weepiness. The author was buoyed by a strong personality and a supporting cast of family and friends, including one whose ovarian cancer serves as a powerful subtext that cancers often kill. What saved Williams was experimental immunological therapy. She entered a phase 1 clinical trial using a combination of drugs designed to thwart the ability of cancer cells to inhibit the body’s immune system from attacking those cells. Usually these trials are conducted to check drug toxicity and dosages. In this case, the drugs helped so many patients that trials for other cancers are now in progress, giving a boost to immunotherapy research in general. The author explains it all: the science, the scans, the constant blood draws, the side effects, the stigma, the guilt of getting sick, the guilt of getting better, the effects on others, including the friends who stop calling you, as well as the support groups she found so helpful.

Williams delivers a complex tale about a complex disease, and by sharing a narrative rich in detail, personalities, and New York scenes, she will ease the burdens of those immediately affected and inform others of progress in cancer research.