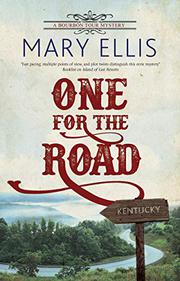 ONE FOR THE ROAD

A reporter meets her long-lost family.

The prolific Ellis, who specializes in Christian romance and mystery, introduces a sassy new heroine in travel writer Jill Curtis, who heads to Kentucky with her videographer, Michael Erickson, to do a story on bourbon. Jill has an ulterior motive for booking them into the Sweet Dreams Bed and Breakfast in Roseville—the inn is owned by Dot Clark, Jill’s grandmother’s cousin, and the two women have been estranged over something that happened back when they were 18. Dot’s husband, Roger, owns Black Creek, a small distillery, and seems to bully his wife when he's at home. At the first distillery Jill and Michael visit, Founder's Reserve, the tour is led by an eighth-generation family member, flirtatious Jamie Shelby, who tells a tale of an old feud with the Cook family—ancestors of Roger Clark. At their next visit, to Black Creek, they find Roger murdered. Nick Harris of the Kentucky State Police, summoned by the local authorities, isn’t happy about Jill’s attempts at sleuthing. But Aunt Dot is thrilled to have Jill around to support her, and her visit affords Jill plenty of time to investigate Roger’s family, some of whom live in the mountains, make a little moonshine, and keep up the family feud. Circled by plenty of suspects, plenty of motives, and two suitors, Jill still inclines to believe the best of people, though that disposition puts her in danger.

This entertaining romantic mystery breaks no new ground but may entice you to plan a trip to Kentucky.