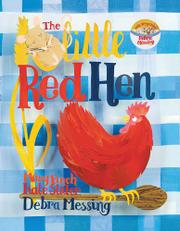 This serviceable retelling of the classic tale is made different by an added scene of redemption, colorful collage art and a story CD narrated by Debra Messing.

In this adaptation, the little red hen’s lazy companions are the rooster and the mouse. When she finds a grain of wheat, she plants it, waters it, harvests it and so on, requesting help each time. The familiar refrain, “Not I,” repeats throughout. The typeface is playful and bouncy, but unfortunately, it is hard to distinguish commas from periods. Given the minimal story structure, the one misstep in sequence seems confusing: The hen asks for assistance kneading the dough and is then said to be kneading the dough “again,” without, apparently, having kneaded it beforehand. The illustrations, made in collage and paper cuts, have a three-dimensional effect and invite inspection. Indeed, youngsters will need to pore over them to catch the subtle changes in the characters’ expressions: After being refused aid so many times, the hen’s eyelids droop; when denied bread, the rooster’s sagging eyelids communicate his dismay. The story concludes with the lesson learned. The next time the hen finds a grain of wheat, rooster and mouse know what to do.

Though this has its moments, Paul Galdone’s version (with or without story CD) is still the benchmark. (recipe) (Picture book/folk tale. 3-6)

THE PRINCESS OF THE SPRINGS
by Mary Finch
Children