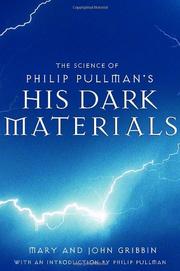 THE SCIENCE OF PHILIP PULLMAN’S HIS DARK MATERIALS

Bobbing along in the wake of Roger Highfield’s Science of Harry Potter (2002), this less-wide-ranging commentary uses select ideas and gadgets from Pullman’s epic as springboards for discussions of Newtonian and quantum physics, dark matter, magnetism, multiple universes, chaos theory and a few other topics on science’s frontiers. Though the Gribbins tuck in frequent references to the novels—pairing Schrödinger’s Cat to a nameless one in Subtle Knife, for instance—and even open each chapter with relevant passages, their focus is less on the stories, or on critiquing Pullman’s grasp of science (which turns out to be a pretty firm one, as Pullman himself points out in his introduction), than in showing how modern researchers are winkling out the universe’s “hidden truths,” a bit at a time. The authors’ implication of a link between the quantum “entanglement” of photons and Jung’s Collective Unconscious is a bit of a stretch, but the buoyant prose and coherent, non-technical explanations will keep readers on board for the entire trip. (Nonfiction. 12+)