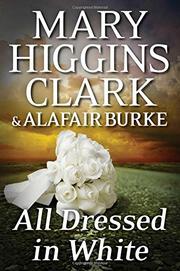 ALL DRESSED IN WHITE

Laurie Moran and the crew of Under Suspicion (The Cinderella Murder, 2014, etc.) revisit the 5-year-old case of the bride who vanished hours before she was supposed to walk down the aisle.

Despite some understandable last-minute jitters on both sides, Amanda Pierce had been looking forward eagerly to joining hands in marriage with attorney Jeff Hunter at the splishy Grand Victoria Hotel in Palm Springs. Instead she went down in tabloid history as the runaway bride who disappeared the night before the ceremony. Now her mother, Sandra Pierce, wants Under Suspicion, which specializes in dramatizing, and incidentally solving, cold cases on television, to reopen the mystery. Producer Laurie gets Walter Pierce, Sandra’s workaholic ex, on board, along with bridesmaids Kate Fulton, Meghan White, and Charlotte Pierce, the bride’s older sister, and groomsmen Nick Young, Austin Pratt, and Henry Pierce, the bride’s brother. Complications have already arisen before the Under Suspicion crew even arrives in Florida. Jeff is now married to Meghan, whom he had dated briefly before she introduced him to Amanda back at Colby College, the school the wedding party had all attended. Bill Walker, the wedding photographer, suddenly recalls that the police never questioned his intern, Jeremy Carroll, who, then as now, seemed a little bit off. Laurie can’t quite satisfy herself why Amanda would have left her modest belongings to Sandra Pierce, Henry’s daughter, but her $2 million trust fund to the fiance she’d just gotten to sign a prenup. And news about the strangling of Colby student Carly Romano back in the wedding party’s college days hangs like a dark cloud over the increasingly tense Grand Victoria.